From the Mountains of Kandahar 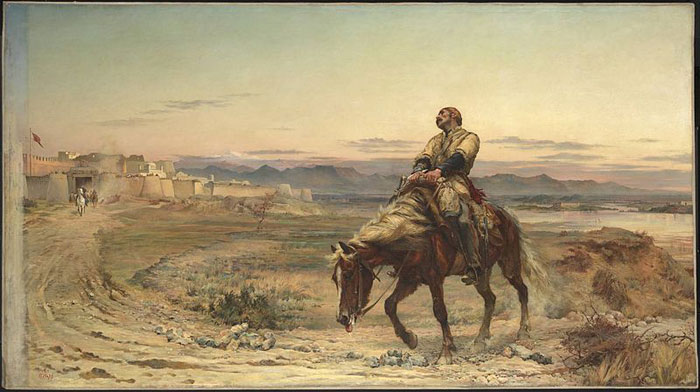 Remnants of an Army, Elizabeth Thompson

As the US and their Western allies beat a hasty and shambolic retreat from Afghanistan, it is clear the wheels of history have turned again. The ignominious end to nearly two decades of American occupation has demonstrated that despite trillions in funding and thousands of lives lost on both sides, the promised remaking of Afghanistan as a liberal Western democracy was not even close to being realised. The humiliating scenes of American aircraft scrambling to evacuate stranded citizens was the crescendo in a veritable symphony of foreign policy disasters that have been mounting since the collapse of the Soviet Union. The fall of Afghanistan does not simply represent a withering rebuttal to American interventionism, liberal democracy, and the notion of universal human rights, it also quite possibly heralds the end of American hegemony and by extension, the globalist world project.

This at first sight may perhaps seem a bold claim. Though the US defeat in Afghanistan is a severe blow both to national pride and to US prestige around the world, in isolation it is by no means a fatal wound. Comparisons with the Vietnam War abound – and decades after that failed conflict, the US remains the unipolar anchor of the world. Yet though the US may have lost the battle in Vietnam, the strength of its soft power and cultural appeal allowed it to triumph in the ideological war between communism and liberalism. The Soviet Union collapsed because many of its citizens wanted the freedoms and living standards of Western democracies. And while the unending stream of refugees and migrants to the West indicate that the living standards of the first world are still sought after, the ideological and moral appeal of Western civilisation has become ever more infirm.

More and more nations are simply opting not to follow the Western liberal democratic model. Just as the US failed to topple Syrian President Bashar Al-Assad, America has been impotent in its efforts to stop the Russian advance into the Crimea, to enact regime change in Iran, and to browbeat European leaders in Belarus and Hungary to liberalise. Some commentators may chalk this up to a resurgent Russia and a rising China rebalancing the global geopolitical dynamics and limiting the foreign policy options open to the US. But while this does partially explain the changing nature of international relations, the US has deeper and more fundamental flaws both in its ability to project its military might abroad, and in the allure of its soft power.

From a purely military point of view, the war in Afghanistan is a stunning defeat for the world’s premier technological power at the hands of a nation whose entire GDP is several orders of magnitude less than the US military budget. While the Vietcong received arms and training from both the Soviet Union and China, the Taliban has had little in the way of superpower support. Many nations have been implicated in its funding – from Russia, to Pakistan, to Saudi Arabia, to the US itself, yet the Taliban did not possess a single tank or aircraft; it had no hypersonic missiles or drones. The Western view of war has become an extension of its view on everything else; war is a technocratic and technological ‘problem’ to be solved by rationality and cold calculation. While the US drone operators in Nevada sat detached and disinterested as they killed from thousands of miles away, the Afghan warrior fought with ruthless determination for hearth and home. For every US technological innovation, the Taliban found a homespun solution. The armoured vehicle was defeated by the IED. The eyes in the sky were rendered useless by knowledge of the local rugged terrain.

War is not simply a rationalistic calculation of which nation has the most firepower and advanced armaments. In struggles of national life and death, there is a Nietzschean will to power, and an ethnic collective self-preservation instinct. After nearly 20 years of the current war, the population of Afghanistan has exploded, and the total fertility rate in the country is one of the highest in the world. Conversely, white Americans for the first time have declined in absolute numbers in the US. The Taliban were guided by a metaphysical and fanatical world view, in which the prospect of death did not intimidate them. They demonstrated an incredible appetite to throw their lives away for the collective good, secure in the rectitude of their cause and the righteousness of their God. Meanwhile, American public and military morale has atrophied completely. From the heady flag waving patriotism of the post 9/11 Bush years to the statue toppling self-hatred of the George Floyd era.

The US has poured a massive amount of sand in the gears of its own military industrial complex. As General Mark Milley pontificates on critical race theory and ‘white rage’, the US military has been hobbled by a mammoth programme of affirmative action, the lowering of standards, and performative wokeness. It is popular for conservative commentators to highlight this as the downfall of the US’ ability to project its power across the globe and to ultimately to win wars. Yet the issue of military competency sidesteps the void at the heart of those fighting for America, namely, the question of what they are fighting for. The fact that the armed forces of the US are increasingly filled with transexual soldiers, feminists, quasi-cultural Marxists, and disinterested recent arrivals is not accidental but reflective of the global elite’s Weltanschauung and of modern America itself.

As liberalism has radicalised in both the scope and severity of its proposed social engineering, it has alienated much of the population in its heartlands. The more radically the envelope is pushed in favour of LGBTQ+ rights, diversity, and atheistic hedonism the less the prospect of adopting liberal ideology appeals to nations around the world. As Western countries fragment and collapse under their own contradictions, those nations of the world who haven’t trodden the progressive path have been granted a unique insight into their potential future and have found the results rather unedifying. Just as the loss of the martial spirit and moral purpose has undermined the American capacity to wage successful wars, the increasingly extreme impositions of the ideology the US represents have galvanized its traditionally minded opponents.

It is likely that Trump’s circumspect and largely conciliatory foreign policy was an admission that the dreams of the neoconservative and neoliberal war hawks had already reached their zenith. It is not that there was no longer any appetite for the elite to engage in foreign meddling, it has simply become clear that the US has a rapidly diminishing ability to engage in it. In the vast game of global geopolitical chess, Biden’s only move was to concede defeat and leave the match. It is possible he may attempt to use this period to regroup and re-arm for the next ‘forever war’. Yet the collapsing internal coherency of the US and the threadbare and morally bankrupt ideology that dominates it seems to make this an ever more remote prospect.

Hope in the modern age is like the Edelweiss flower, in that it blooms in mysterious and odd places. The shock of the defeat of the US at the hands of the supposed Afghani barbarians is comparable to the Roman horror at the legions lost when Arminius’ German warriors ambushed General Varus in the dense Teutoburg forest. The coming seismic shift in the balance of global power represents a chance for patriots to reshape the current dysfunctional world order into a saner one. Yet liberalism is nothing if not an adaptive, corrosive, and implacable enemy. The fact that the Taliban is holding press conferences in which it cloaks itself in the rhetoric of respecting women’s rights and unbridled restraint and inclusivity speaks to the continued spellbinding hold liberal ideology has on the world Zeitgeist.

Despite the left’s vitriolic insistence, the traditionalists of the West and the Taliban cannot be conflated. While we can respect the Afghanis’ heroic resistance to occupation, their dogged will to survive and to flourish under their own customs, and their metaphysical sense of purpose, we must chart our own path. The repressive, vicious, misguided, and totalitarian agenda of remaking states that have no desire to be remade has collapsed. It is now our turn to show at home that we will not be remade in the elite’s dysgenic and profane image, just as those abroad have resisted it. While our enemies are distracted with the chaotic collapse of their over-ambitious campaigns abroad, we must labour to undermine these corrupt regimes at home. The example of a foreign nation wrestling control of its destiny back from those who would seek to dominate it should serve as a beacon of hope to us. Our opponents have never been weaker, and though the apparatus of repression they preside over ratchets up the pressure daily, they are losing control of both world events and their own citizens. The Soviet Union dissolved just two years after its withdrawal from Afghanistan. The process of disintegration which started far away in the mountains of Kandahar has come to the Western heartlands now, and it is up to us to reforge the coming chaos to our advantage.

The Long Winter of Liberty