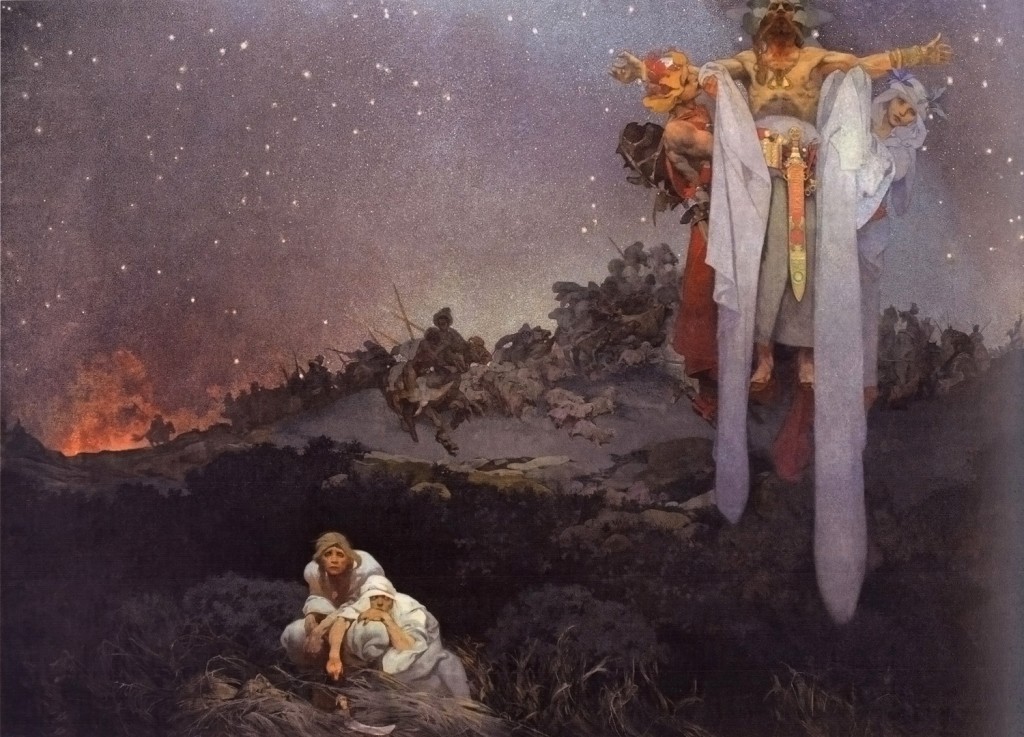 The Trump administration is a government under siege. Despite securing the greatest electoral upset of recent history and overcoming the slings and arrows of recounts, legal challenges and violent mass protest, it is an administration haunted by an omnipresent and malevolent spectre. While accusations of misogyny and racism failed to derail the President, the dogged claims of nefarious Russian influence and collusion have managed to inspire a near psychosis in Republicans and Democrats alike. This however, is nothing new. Talking tough on Russia has been a staple of Western governments; fabricating the Russian bogeyman a seemingly essential element in liberal national unity and a fundamental plank of contemporary foreign policy. Yet there is more to this Russophobia, this total distrust of the East, than simple political expedience. Globalists and liberals have identified Russia and the East as a grave existential threat to their grip on power, one that must be stopped at all costs. Thus, the question must be asked, what are they so afraid of?

On the surface, the answer to this seems obvious. Russia is an illiberal, bellicose and calculating semi-rogue state which has designs on reoccupying its near neighbours and establishing itself as the new world hegemon. As a perennial enemy of the West, its mere existence entails the remote but ever present threat of nuclear Armageddon. Its calculating eternal despot is always looking to exploit our weakness and provoke us, as evidenced by Russian naval manoeuvres and its military’s endless exercises. In this narrative of the liberal institutionalist, we live in a world where a neo-Hunnic horde could sweep over the steppes and descend upon us at any time. Yet for an ideology which declares itself steadfastly against xenophobia, Orientalism, and paternalism these are shockingly primitive appraisals of the world’s second power. And if these assumptions were confined merely to Russia, they would be egregious but at least could be masked in the superficial garb of national interest. But even a cursory glance at contemporary politics reveals that it is not the Russian state the liberals fear, but the re-awakening of the Slavic spirit.

It is amid this atmosphere that the European Union has become increasingly dismayed by the activity of its Eastern members. Viktor Orban’s steadfast Hungarian resistance to the vast refugee columns that swept over Europe in 2016, including a sustained campaign of barrier building not unlike the plans of President Trump, are a long running source of chagrin to the institution. But he is by no means alone in earning their paternalistic ire – the positions of the Czech, Slovakian and Polish governments have all come under fire for a myriad of sins including prioritising Christian refugees, refusing benefit payments, taking only a paltry number of refugees, and harsh treatments of refugees upon arrival – refugees to Latvia and Lithuania were so disillusioned they reportedly abandoned the countries altogether after only a brief stay. A perhaps even more significant departure from the party line came in the wake of the attack on the Berlin Christmas Market. While Germany and the EU were busily trying to bury the horrifying news in their usual platitudes of living with terrorism and how relatively safe we all are, the Polish people exploded in indignation at the loss of one of their sons, Lukasz Urban, the lorry driver who was killed and whose vehicle was used to perpetrate the attack. The Polish people immediately sought to engineer his elevation to national hero status, with hundreds attending his funeral including the President as well as calls for him to posthumously receive the Order of Merit.

This attachment to even a ‘mere’ lorry driver may at first seem simple opportunistic populism; but it is indicative of a central tenent of the Eastern spirit, namely: tribal thinking. Identifying with fellow Christians, attempting to resist the forced transplanting of outsiders, and considering even the poorest in the ethnic community worthy of defending are all not merely incidental acts of government, but products of the Eastern mindset. It is the same mindset that inspires Russia not to view itself bounded by state lines, but to consider wherever Russians dwell to be Russia. This is a queasy prospect for Western policy makers who have done their best to detach states from any notion of being made up of the citizens; and instead view the state as first and foremost a bureaucratic and managerial entity which draws its power from above, not below.

The growing revolt in the East has also highlighted a fundamentally flawed assumption at the heart of liberalism: liberalism sees all peoples as ultimately interchangeable, and while liberal policy makers knew that Eastern Europe was still rife with the regressive attachments to kin, country and religion, they believed that a change in economic circumstance would precipitate a change of worldview. Quite simply, they thought they could remake their societies with cold hard cash. This is borne out by the ruthlessly pragmatic architects of neoliberalism in Russia, who in unleashing the ‘shock therapy’ transition from the Soviet economy to free markets affected a national demographic crisis as so severe it plunged the nation into negative population growth as thousands died in the squalor of poverty and alcoholism; all while the crown jewel assets of Russia’s previously stated owned economy were seized at rock bottom prices by predatory capitalists.  What should have followed this ignominious episode if liberal doctrine was correct was a reintegration of Russia into the world system and a flourishing of pluralistic democratic society. Instead from the tumult emerged a fiercely nationalistic uncompromising leader who immediately set about undoing this catastrophic external meddling.

Undeterred by this abject failure, liberal policy makers tried the exact same policy again, this time on the newly freed states of Eastern Europe. The cause of their failure, they reasoned, was not the particularities of the Eastern spirit – but rather the underestimation of the amount capital required to reprogram a people. So when the waves of Eastern European states acceded to the European Union, the liberal elites enacted their dogma with renewed vigour, this time eager not to make the same mistake as they did in Russia, and thus they were generous with the terms of loans, amount of foreign investment and development packages granted to the fledgling members. However, the result of such policies once again was dire demographic strife as well as this time draining the local populations of the most productive members who freely sought to chase wealth, fleeing their native countries en masse. Despite these depredations, the globalists thought they had succeeded this time. The Eastern European states with their desire to free themselves from Russian influence eagerly committed to fiscal and military integration.

Yet all this overlooked one other vital aspect of the Eastern psyche – the martial spirit. Though charged with dark plots for world domination, it has twice been the Russians who have stopped the march of globalism bent on creating a global order by force of arms; first defeating Napoleon on the frozen steppes of Borodino and second demolishing the ambitions of the thousand year Reich in the rubble of Stalingrad. Russia has demonstrated itself to be not the eternal enemy of the West, but rather the avowed enemy of globalism. When it once again felt the tightening noose of an encroaching foreign ideology it acted swiftly and uncompromisingly to stop its advance and also demonstrate the impotence of the ideology, firstly with its war in Georgia and secondly its annexation of the Crimea in Ukraine. Herein lies liberalism’s most fevered fears about Russia, in these two incidents it proved many of the most sacred assumptions of liberalism to be untrue. The will to fight was ultimately proven to trump economics and institutionalism, and in its projection of force to secure its native enclaves in Abkhazia and the Crimea, Russia utilized military power masterfully in stark contrast to the costly and ultimately futile liberal invasions of Afghanistan and Iraq.

This embarrassment was compounded even further, when the West had to call upon Russia’s help to extricate itself from the colossal disaster it had created in the Middle East. It was Russia who decisively scuppered Western plans to deploy ground troops to Syria, thus averting yet another crisis. In exerting such power over international politics Russia unravelled yet another attempt at a hegemonic unipolar world order; and in the same instance had proven why monolithic bureaucratic group think was so dangerous. The indefatigable Russian spirit had burst from the permafrost of the Soviet Union, undone the efforts to sabotage and subjugate it by neoliberal zealots, and now was ready to strike a blow at the true enemy of Western and Eastern Civilization – radical Islam. It is no coincidence that ISIS began to suffer serious military reversals once the West finally allowed itself to co-operate with Russia, who pursued the group with its characteristic pitiless ferocity; demonstrated most starkly by reports of a young Spetsnaz officer who called an airstrike on his own position to eliminate nearby ISIS fighters. Utilizing the brutal and hard learned lessons of Chechnya, the Russians began to deal deep wounds to ISIS, a feat which the West had singularly failed to achieve.

At the same time, the tribally thinking states of the East began to realise that the European Union and global institutionalism was not delivering the utopia it had promised. The aid money had long since dried up; the rush of migrants made demands on economies and peoples who have little to give; and most damningly, the wave of terrorism that swept Europe in 2016 proved that the European Union and NATO had not only failed to protect its nascent external allies in Georgia and Ukraine, but could not even protect its own citizens. Thus while some Eastern European states have remained faithful to the new order, others began to have serious reservations. While they had wanted to settle old scores with Russia and sought to better their economic lot, they did not wish to abnegate their right to exist as many Western European states seemed intent on doing. To the inheritors of the legacy of John III Sobieski and his famed winged hussars who played such a pivotal role in saving Europe at the Gates of Vienna in 1683, swapping Russian terror for Islamic terror has come to seem a less than appealing deal.

It can thus be seen that, while temporarily dampened, the Slavic spirit is awakening in Eastern Europe, defying the will of the increasingly authoritarian will of their new Union. At the same time, Russia is confounding liberal ideological assumptions as well as consistently frustrating liberal foreign policy aims. It is for these reasons that the mere insinuation of Russian involvement sends liberals into such fits of terror and explosive rage. In their hearts, they know that Russian involvement has precious little to do with either Trump’s election, or with his wish for more cordial relations with the state. It is not the machinations of Russian intelligence services or Russian money that has swayed his mind, but current events that may have imbued him with a dose of sympathy to Eastern values. It is this fear that drives liberal outrage, unable to process that it is their  failing narrative and their own mismanagement, not conspiratorial plots that have undone them. What they fear is not simply a presidency open to the underlying assumptions of the Eastern spirit, but the wholesale collapse of their ideological project. What they fear, whether in the defiance in Eastern Europe or in the foreign policy victories of Russia, is that The Ice Man Cometh, and when he arrives, he will sweep away the meek, exhausted and ultimately calamitous ideas of the global elite.